Step into a new modern mythology

In the Cursed Land, there is nothing more dangerous than the memory of happiness…

Ebook delivered by Bookfunnel, read on any device!

Harper O’Neill figured that, after surviving the attacks of a murderous goddess Badb Catha (and saving her mother in the process), her journey was over.

But fate, it seems, has other plans: Sauvie Island, a Portland tourist trap that used to be famous only for its high prices, is now… changing. Mists cloak the island, and Fae enchantment is transforming what used to be a kitschy vacation spot into a labyrinth where Badb Catha's Fae lurk, waiting to feed on the bodies and minds of the unwary, and on the very souls of the dead – including the spirit of Harper’s own father.

Harper has to act. To face the soul-devouring Sluagh, to release her father’s spirit, to save her best friend, and to protect the world from the clutches of Badb Catha. Again.

Only this time, it’s different. This time, the Fae have discovered Harper’s weakness: a need to take back the future Badb Catha stole.

Now, trapped in a magic dreamworld of the life she should have had, Harper has to decide whether she wants to live in a perfect fantasy, or fight to save her father and her best friend from fates worse than death.

She’s been hunted by Fae before. But now Harper faces a far worse threat: finding a way to escape The Cursed Land.

The second book in The Last Battle of Moytura series, The Cursed Lands is a must-read for fans of Hounded, The Iron King, and A Court of Honey and Ash. Click the link, get your copy, and see if you have what it takes to escape THE CURSED LAND! 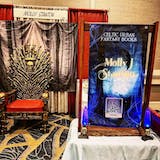